Thanks to 2 second half goals from Paul Marie in the 57th minute and Cristian Espinoza in the 72nd, the Quakes defeated Cruz Azul in their second meeting since October 2018 when they played to a scoreless draw.

Our game set is here–both including the original posts and the Instagram photos.  The shots were all taken from the upper rows of PayPal Park. 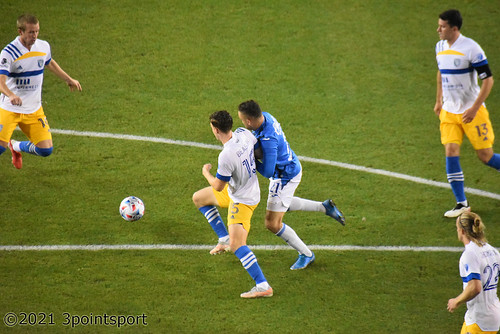 Both teams resume league play on Saturday October 16 with the Quakes on the road to play LAFC 12:30pm kick off, while Cruz Azul will resume Liga MX play hosting Tigres 7pm start.

In a game that was billed as a friendly, the Quakes fielded a mix of regulars and bench players despite having several key starters missing due to international duty against a team that is in the middle of their Mexican league season.

The game marked the debut of 15 year old Cade Cowell.  He immediately made an impact with his goal in the 61st minute with an assist from fellow homegrown player Tommy Thompson.  Although the match was a friendly, head coach Matias Almeyda fielded a lineup of younger players that included teenagers Cowell and Gilberto Fuentes, Reno loanee Duke LaCroix, and draft pick Siad Haji.  The result was the same loss by a score of 2-1 although the match was merely to test out players who would otherwise be sitting on the bench or on loan to affiliate Reno 1868 FC.  Monterrey accounted for their scoring in the first half with goals by Rogelio Funes Mori in the 6th minute and Maximiliano Meza in the 25th.

The Quakes resume MLS play next weekend hosting LAFC next Saturday March 30 at 12:30pm. Monterrey also returns to Liga MX play at home against Cruz Azul on the same day at 8pm.

Before a sellout crowd of 18,000 the Quakes and Cruz Azul played to a scoreless draw.  The match was eventful in the sense that the game was played at a mini-Azteca and was the second Liga MX team that the Quakes hosted this season, having played Leon in March.

The game also marked the return of Rafa Baca, who spent 3 seasons with the Quakes from 2011 to 2013.  His return to the Quakes as a second half sub was met with respectable cheers.

The Quakes international record is now 11-10-10 having drawn both Manchester United and Cruz Azul this year.  The team has not been successful playing Liga MX/Primera Division teams in their history, but the draw was their fourth, and now have improved to 1-7-4. Next up for the Quakes will be their final home game at Avaya Stadium on October 21 against the Colorado Rapids at 1:45pm.  Cruz Azul will play on the road against Querétaro on Saturday October 20 at 3pm.

The San Jose Earthquakes have added another game to the schedule–this time hosting Cruz Azul on Saturday October 13 at 5:15 pm.  This is the third friendly the Quakes have hosted this season and the second against a Liga MX team having played Club Leon in March.

For season ticket holders this is Bonus Game C.  Tickets will go on sale Wednesday August 29 at 10am through Ticketmaster.com or by calling 800-745-3000.

Landon Donovan was greeted with a mix of boos and cheers in his Avaya Stadium debut, but he had the last word in the exhibition with his goal in the 19th minute. That was the only scoring as Club Leon defeated the Quakes 1-0 before a crowd of 14,532.

The Quakes international record is now 11-10-8. The futility for them continues with a 1-7-3 record against the teams from south of the border. Next up for the Quakes will be New York City FC on March 31 in their bi-annual appearance at Avaya Stadium. There is an early 4:45pm start to accomodate the ESPN networks, who will cover this match live. Leon will continue their road tour against Tigres UNAL on the same day.