It is official, the 2020 season will resume July 8 at the Wide World of Sports complex in Orlando, Florida in the form of a World Cup style tournament with 3 games in the group and a knockout round single-elimination playoff with the 16 teams out of 26 advancing (details following).

The Western Conference Group will consist of 3 groups of 4 teams, while the Eastern Conference will have 2 groups of 4 clubs and one group of 6. Nashville SC will switch to the East to “even out” the number of teams. The top two teams from each group, plus 4 more based on points will advance.

The Final will be held on August 11, with a spot in the CONCACAF Champions League on the line.

More information will be announced and updated here. Right now, the respective releases.

NEWS: Earthquakes to Compete in MLS is Back Tournament in Orlando (sjearthquakes.com)

MLS is Back Tournament (mlssoccer.com)

The Quakes are back.  Their schedule will resume in the form of a World Cup style tournament to begin July at Orlando.  That part of the 2020 season is confirmed.

The remaining schedule may consist of Western Conference teams at Earthquakes Stadium behind closed doors.  However, we are also supporters and fans and the crowd is a very integral  part of the game, also known as Player 12.  Soccer without fans is nothing, and on that principle 3pointsport will sit this one out  and hope the matches will be broadcasted on ESPN, Fox Sports, or NBC Sports Bay Area/California.  The exception to the rule is the club that rarely visits the area, if ever.

When the supporters are welcome to return to the stadium 3pointsport.com will also join suit.  For now, we are sitting this one out.  Stay home, save lives.

An update on Quakes assistant coach Benjamin Galindo, from the team website. Also from the MLS site.

The Roots are also back with their fall season to begin September 5–their Eastern counterparts will start early on August 8.  However, it looks like their schedule later in the year will consist of a home and home .  The October tournament will begin in October at a location to be determined.  What remains to be seen is whether Laney College or any of the other NISA clubs will allow fans, be a full crowd or limited social distancing.

Also soccer is a place of philanthropy as evidenced with SF City and the San Jose Earthquakes. The Roots has a list of resources where to donate to various causes, especially the Black Lives Matter social justice movement.

SF City has a donation page to Best Buddies. The 2020 season was cancelled but they won’t stop in helping out in the community.  Since this year is a virtual walk to take place June 20, any amount helps.

The info about Best Buddies is here:

Everybody needs a friend. But not everybody has one. It can be very hard for people with intellectual and developmental disabilities to make connections on their own. So Best Buddies matches them with a peer volunteer to form a “buddy pair”. New friends open up a whole new world of opportunities! And donations from people like you and me make local Best Buddies programs possible. Big, small, somewhere in between your support will not go unnoticed. Join us in giving the gift of friendship – register to walk with us at the Best Buddies Friendship Walk or make a donation today!

We will be back if there is any breaking news with Bay Area soccer.  Right now, stay safe, stay home, and wash your hands!

We can’t make change unless we change ourselves. At the San Jose Earthquakes and in Major League Soccer, we stand against social injustice, racism and prejudice. We condemn the police killing of George Floyd and are proud of the peaceful protestors who are taking meaningful steps toward social justice in our community. During this time, it’s important we listen to the voices in our Black community and learn how we can make systematic changes toward unity. We’ve provided national petitions to sign and national organizations to donate to in our ongoing efforts against anti-Black racism. (sjearthquakes.com)

It looks like the MLS season will resume, but in an altered format.  The schedule is to continue in the form of a tournament to be held in Orlando and subject to team testing protocols.

Details to be provided in the coming days.  In addition to the tournament, there is a plan to finish the season with 20 games scheduled, with the probability of those matches being played behind closed doors. As of now, the Quakes are the only team that has not resumed training. The NPSL and USL League 2 seasons have been cancelled, while NISA is planning to resume in the fall. Right now, only two players have tested positive for Covid-19 so expect a routine amount of testing leading up and during the rescheduled games.

This was overlooked.  Moreover, it looks like the USL East Bay outfit is on pause. The proposed team is still looking to play, but with most likely a reduced capacity.  As of now the USL Championship (Tier 2) season is currently suspended.

The stadium was supposed to part of a combined hotel/residential complex adjacent to the Concord BART station but right now, the current climate is putting mass gatherings such as sporting events on hold.  If and when Sacramento joins MLS the East Bay team would be the closest club in the Bay Area.

It appears that MLS may return to play.  However, there may be some sticking points with the possibility of a lockout occurring per Jeff Carlisle of ESPN

Also, some very hopeful news on the health of Quakes assistant coach Benjamin Galindo, via Joel Soria on Twitter.  (Note: he has spun off to report independently on the current state of affairs in San Jose so give it a follow, except if it is news).

And the obvious. The teams explain things best regarding recent events

A statement from the club. #GeorgeFloyd

A statement from the San Francisco Glens.

Today, we remember and honor Harvey Milk. Let us all continue to fight for justice and equality for the LGBTQ+ community. #HarveyMilkDay

We remember those who serve and those who lost their lives.

No news on the soccer front except the latest buzz is for a return to play sometime in July but not here in San Jose.  The Roots already have cancelled their Spring season and plan to return in the Fall possibly behind closed doors.

However, we have something to get you through the week.  The Quakes have released a mini-documentary about the 1974 NASL team with interviews from the players who were on the roster.  While this doesn’t have 10 hours of footage of basketball, this story could have been shown in more than one hour, or extended to include a few more seasons.  Still, this is a condensed story of that year and is worth the watch.  Enjoy!

There’s no news on the soccer front this week.  However, here’s an interview with SF City board member Jake Steinberg on supporter ownership, which is the club’s management model.  The focus is also on Chattanooga FC of NISA, so have a listen and enjoy. 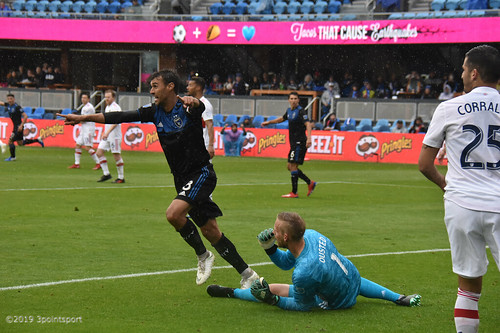 No hashtags. 5 years in the making. Fun day tagging @drive_x_strike @sjquakesfan and @stillfragments trying to soak up the events. #sjearthquakes #groundhopping #quakes74 lost my $10 monopod that's fine there are more valuable things like family and camaraderie #3pointsport notebook