In the first soccer tour to hit the Bay Area since 2019 and the first club game in San Francisco since 2014, a capacity crowd was treated to an entertaining match in which Real Madrid of La Liga and Club America of Liga MX squared off in an exhibition promoted as the “Soccer Champions Tour”.  The result was a 2-2 draw thanks to goals from Karim Benzema (22nd minute) and Eden Hazard from the penalty spot (55th minute) for Madrid.  For the opposition, their tally came from Henry Martin (5th minute) and Alvaro Fidalgo off the spot as well (82th minute).

Major players were brought in for this friendly as Benzema, Hazard, Toni Kroos, and Vinicius Jr played for Real Madrid, while familiar names such as Memo Ochoa and Jonathan dos Santos suited up for America.

The full album including what is posted from Instagram can be found here. 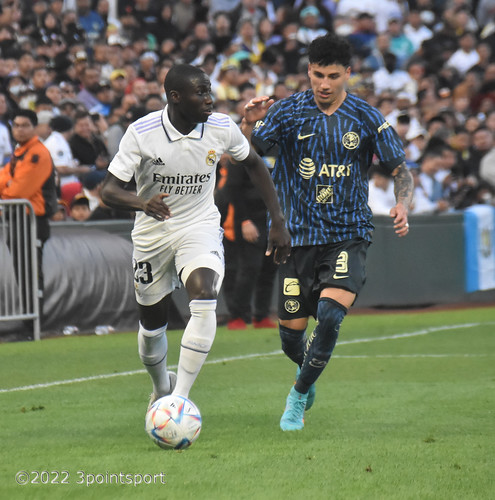 Real Madrid will conclude their tour with a match at the Rose Bowl in Pasadena against Juventus (Turin, Italy) on Saturday July 30 at 7pm.  As the 2022 UEFA European Champions they will square off against Europa League Champions Eintracht Frankfurt of Germany in the Super Cup on August 10 before starting La Liga play against Almeria on August 14.  Club America will return to league play with a match against Leon on Sunday July 31 at 7pm before another friendly against LAFC on August 3.

Right now we’re at the International Champions Cup at Levi’s Stadium between Benfica and Chivas.  3pointsport will be posting highlights later on but for now, sharing some throwback sets courtesy of FootySF