The Roots hosted their first game of their second USL Championship season hosting expansion club Monterey Bay.  The game was full of drama with the visitors getting a stoppage time 3-2 win, which was their very first in history.

Since we were in the stands for the game, we will need to report that it was not without incident getting inside the stadium but thankfully our season ticket contact with the team was able to get the stuff in.   We cannot take any monies like free snacks or free tickets but we are willing to be fans so as long as we can share what happened from that spot.  The mission statement has always been to tell the stories from all the leagues around the Bay Area be on the pitch and/or the seats.  It is preferred to be in the former but we can be “homers” in the latter.

Our photo album including the gram posts are here: 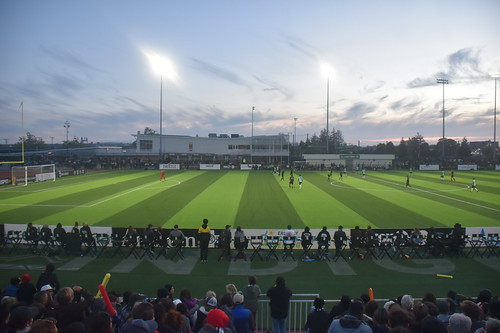 Oakland will try to get their first win of 2022 when they continue their stretch of matches with a match at New Mexico on Wednesday March 30 6pm start, before returning home against the Tampa Bay Rowdies 7pm start, while Monterey Bay will try to get their second ever win with another road game–this time 80 miles up the road at Sacramento on the same day, same time start.  They will make their US Open Cup debut with a neutral site game at the home of the Quakes, PayPal Park, on Wednesday April 6 against NISA debutant Bay Cities FC of Redwood City.